Join 1,947 other followers
Follow The Visual Chronicle on WordPress.com

Today I decided to do a post about something different and it is a bittersweet subject for me. I was originally going to title the post “Faces Of The Betrayed” but I named it “Sample A Slice” referring to the sign in the first image. I wanted to give viewers a small sampling of the faces of former co-workers who will all be losing their jobs as of November 12th 2015 (my wife included).  Just for the record it really is a post about betrayal and deceit.

The Great Atlantic & Pacific Tea Company is shutting down operations and closing all of their stores after 156 years in business. A&P was a supermarket chain founded in 1859. They grew to national success in the mid 1900’s and had stores from coast to coast. You might even remember your neighborhood A&P market or the smell of Eight O’clock brand coffee beans being freshly ground at the check outs.

My wife and I decided to take a trip down to the North Babylon store to say our final goodbye to some really good people that we both have worked with in the past.

You might ask yourself why are these people smiling, they are all going to be unemployed in a few days. They are smiling because they are all good people and veterans of this industry.  They have been raked over the hot coals by people they trusted and no matter what you throw at these people you can’t break their spirits.

Some of them started with this company as teenagers and have worked into their forties and fifties in hopes of retiring some day but they will have to put those plans on the shelf after the combination “one two punch” delivered by the union and company these past few years.

Before I piss some people off let me first state that I have been a loyal union member my whole life.  My first 10 years in the work force was in the automotive industry and I was a member of the United Auto Workers Union (a very strong union and not afraid of striking) and for the next 33 years I belonged to the UFCW Local 1500 (United Food And Commercial Workers) which in my experience was one of the weaker unions unfortunately.  The sad part is that most of my co workers never had the opportunity to work for a strong union and after this turn of events will probably never seek employment in union shops because they are so turned off.  Don’t get me wrong I’m not blaming the union for everything because there is plenty of blame to be shared by the mismanagement of the company also. 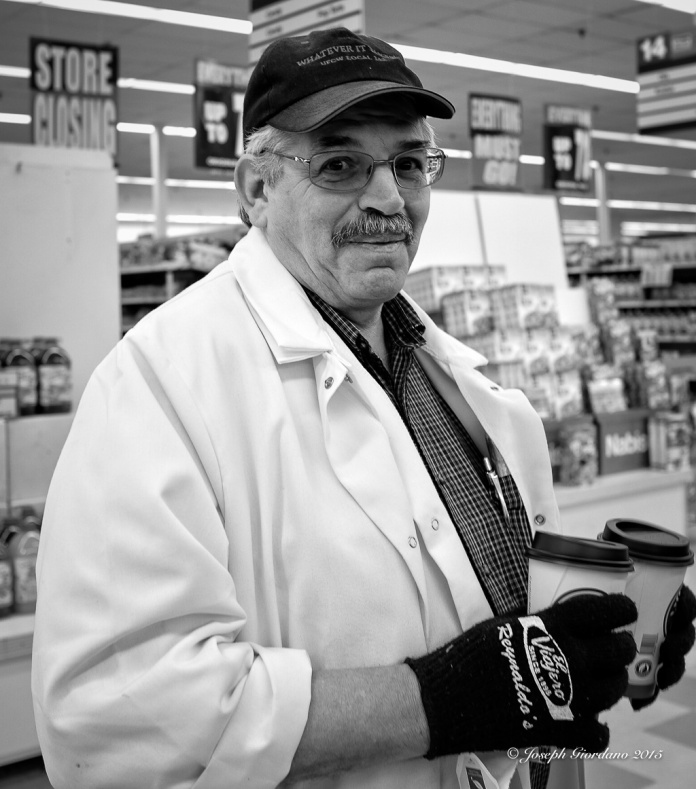 The first blow came from the union in 2010 when they changed the full retirement age to 65. In previous contracts the workers belonging to UFCW Local 1500 were eligible to retire after 30 years and age 55 with full pension (no medical included). I fell under one of those old contracts and was able to retire and collect my full union pension.  These other people (including my wife) have over 30 years in with the company but she is won’t be as lucky as I was.  Along with any other worker who was in their fifties at the time of the contract change my wife will have to work until she is 65 years old in a Local 1500 shop before being eligible to collect her full pension. The chances of that happening are pretty slim considering the ripple effect caused by the closing of this company. Some 30,000 jobs in 4 states will be affected.

Anyone who is familiar with the retail food business knows that workers bodies usually give out way before 60 years of age with a variety of ailments.  Lower back problems such as herniated discs from constant lifting or unsafe conditions (my issue).  Accelerated arthritis from working in refrigeration for years. Repetitive strain injuries from doing the same thing over and over every day.  Knee replacement surgery from having to pack out the lower shelves on your knees for years.

The excuse the union gave for raising the pension age was that not many people were taking advantage of the 55 year old retirement age.  In my opinion they were just trying to protect their stacks of pension money and decided to change the rules toward the end of game for many of these hard working people who counted on retiring at age 55.  I also think they knew what was coming down the road with the companies financials and didn’t want everyone retiring at age 55 and depleting their funds. If the union really wanted to do the right thing maybe they would change the retirement age back to 55 years of age for full pension and prove me wrong.  It would be the correct and decent thing to do at this time of great stress for workers who face unemployment for the foreseeable future.

The second blow came when the company decided to file for bankruptcy the first time in 2011 and the union agreed to major concessions such as sick days, vacation time and loss of paid holidays. There was also reduction in wages amounting to 6 1/4 %.  All of this was supposed to have been done to protect jobs and give us the impression that we would have some sort of job security by including a new clause in this revised contract about mandatory severence pay if the company ever decided to close stores.

The knock out blow came from the company claiming bankruptcy for the second time in July 2015 and deciding to liquidate the business rather than the management changing their antiquated strategy on how to run a business.

The union screwed them with their pension then the company screwed them by cutting their means of income.  Who else got screwed ?  The vendors that make a living delivering to the stores bread, eggs, cake, snacks you name it someone got screwed.

Before I go too far I have to correct myself because the company handed out over nine million dollars in executive bonuses the week before they filed for bankruptcy so not everyone got screwed. Its so ironic that the clowns that ran the company into the ground (yes the empty suits) get to go home and have a very merry holiday season with their fat bonuses, yet the people in the trenches, the hard workers get to walk away with nothing.  The bankruptcy judge didn’t even have the decency to give the workers the amount of severence pay they were originally promised in their revised contracts, he cut that amount in half which basically amounts to “gatz”.

You might say Joe you sound very bitter ?  I guess you could say that. I feel someone has to say what is on everyones minds.  Is this turn of events going to affect Terry and I in a negative way ?  It might but most likely not. My heart really goes out to all the people who have worked for this company their whole life and still have mortgages to pay or their child’s college.  I wonder how many people are just going to pack it in and move out of state or even just walk away from their homes (lets face it Long Island is one of the highest taxed and cost of living areas in New York) $400 a week unemployment won’t go too far. 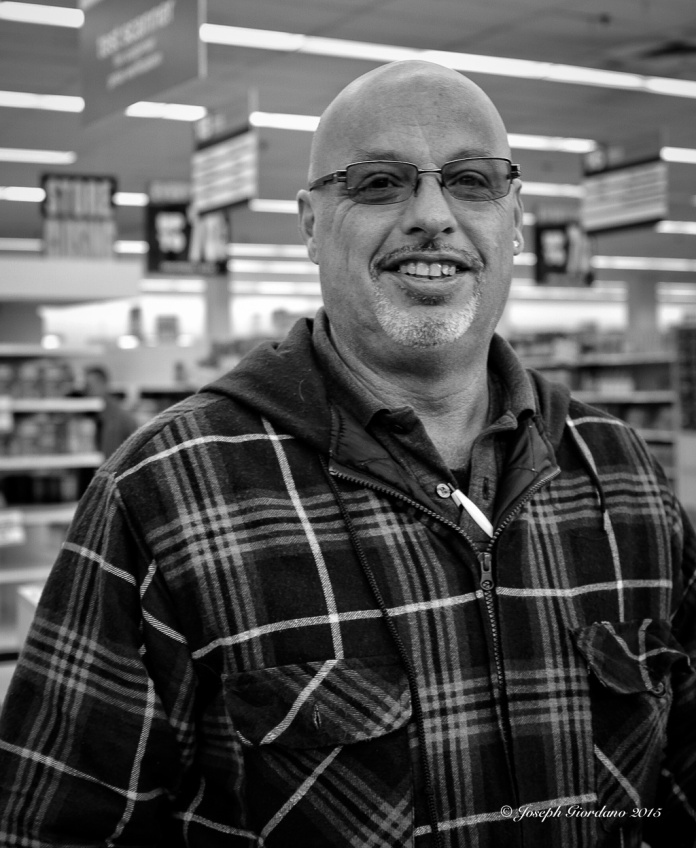 Mark “I swear I wasn’t outside” but his Transitions eyeglasses say otherwise.

To see these people smiling is a testament to their strong backbone and spirits.

And now we get to the part where I think a lot of people might be relieved the uncertainty will finally be over on Thursday. 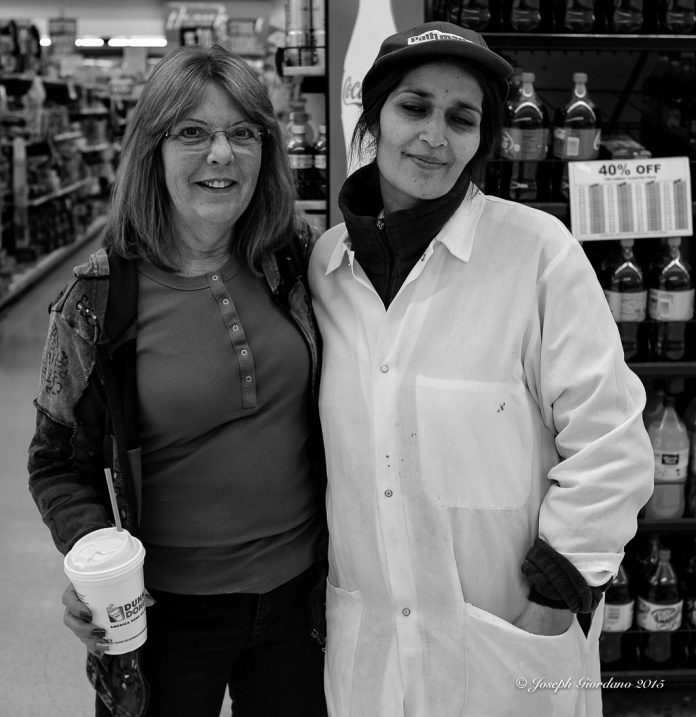 Our good friend Roia who seems to be have forgot the toothpicks that hold her eyes open and she also brushing up on her smiling skills lately (boy do I hate trying to take photos of Roia she’s so uncooperative :)) 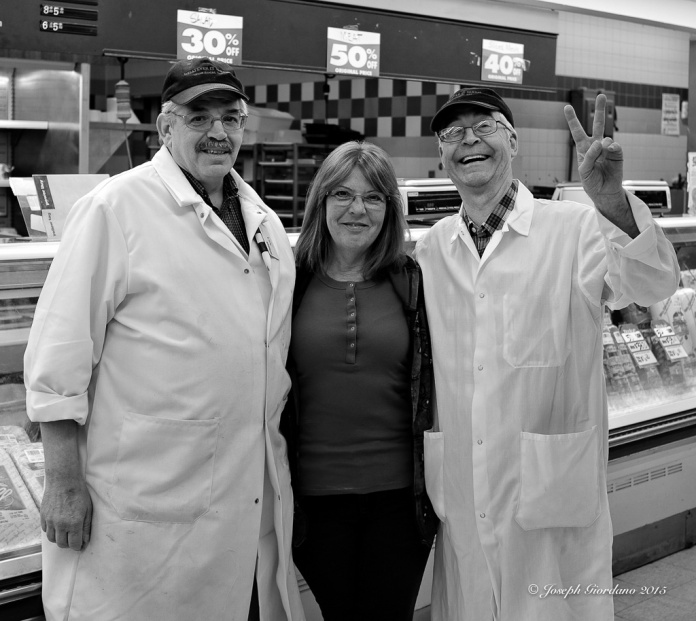 Looks like a Terry sandwich how ironic 🙂 left to right Nick and Duncan (peace brother).

I had the pleasure to work with Nick for a few years and Terry and I have known Duncan forever.

The remainder of the UFCW Local 342 meat cutters and deli workers.

Terry and I have also known George forever. 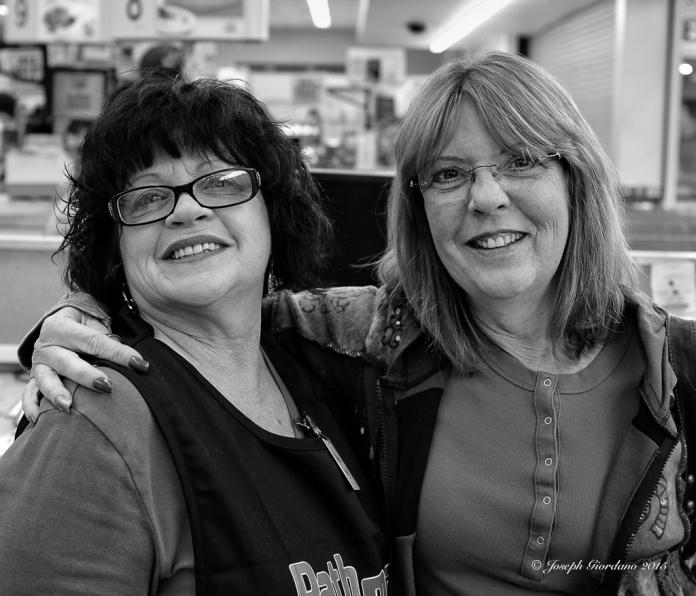 We could always count on Roxanne to come through with the good stuff, not that fake Italian stuff they sold in the store.

I have known Kevin since my first day on the job 36 years ago and boy do we have some funny stories to tell.

It just wouldn’t be right if Louie was wearing his glasses on his eyes !

Nick having to break the news to a customer that the “Soup of the Day” program has been cancelled until further notice. 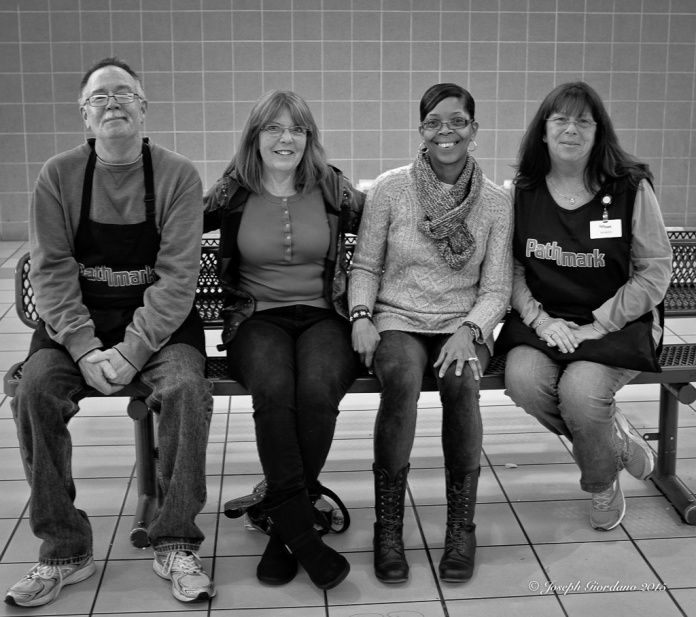 Kevin is smiling because he is thinking about one of those funny stories right now.

This just about sums it up as of Thursday !

I hope I didn’t offend any of my friends pictured with my comments.  If I offended any union or company officials consider it partial payback for the way you screwed each and every one us directly or indirectly !